800 Miles and a Mule.   Whose mule?  Well, neither really, just a fantastic road trip in the Northeast to one of the freshest, most concentrated beer scenes in the country ATM.

The roadtrip from NJ to ME is ripe with interesting beercation detours and landscapes.  Although we missed some great stops, we made the most of a few trips and consolidated the route from Connecticut to Maine to include the breweries noted. 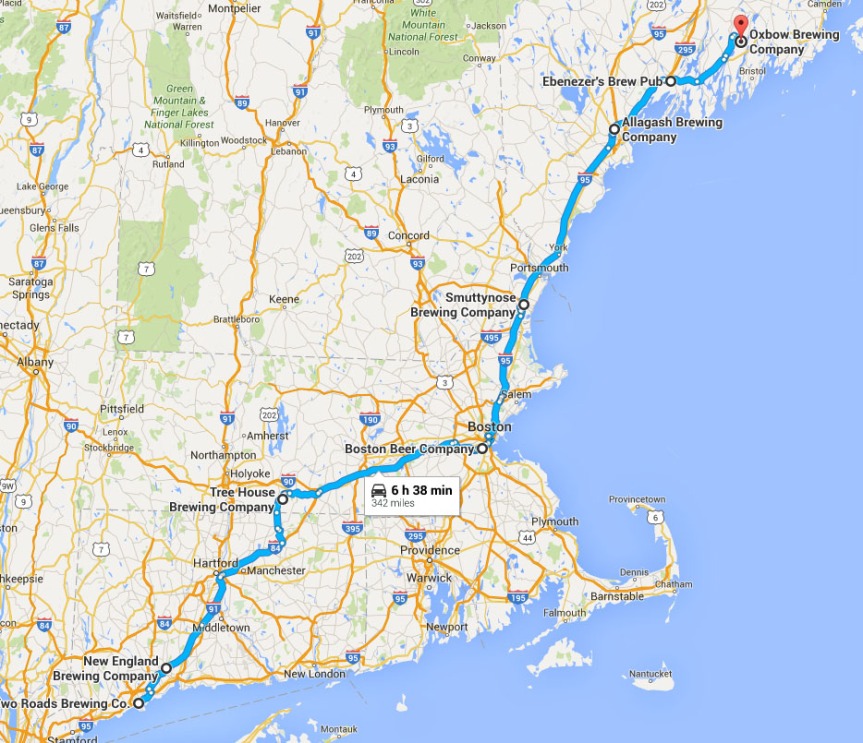 Located in Stratford, CT, just east of Bridgeport, immediately off Exit 31 on I-95.  Worth a stop.  Good beer, large facility in a re-purposed warehouse building.  Interesting business plan.  Built to be the “Cadillac” of contract-brewing by the founder (a former Pabst CMO), this $20+ million facility generates approximately 75% of their business contract-brewing.  Lawson’s Finest, Evil Twin, Stillwater, Peak Organic and others use this state-of-the-art facility for some of their contract brewing arrangements.  Two Roads has increased the percentage of beer they brew for their own label, and is finding its way into bars and bottle shops in the Northeast. The tasting room is large and attractive, and food is available from on outdoor food truck.  A quote from Robert Frost’s poem is printed on the wall of the tasting room:

“Two roads diverged in a wood, and I –

I took the one less traveled by,

And that has made all the difference.”

New England Brewing’s brightly colored cans are available in the area, and distribution is increasing.  Their flagship beer, originally known as Gandhi-Bot, has been renamed G-Bot after a lawsuit claimed the name dishonored the memory of Mahatma Gandhi, is very difficult to find, but can be available on tap at the brewery.  Other beers, with names such as Fuzzy Baby Ducks, Imperial Stout Trooper and Sea Hag are available more easily and worthy of sipping! 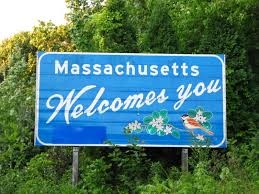 Off the beaten path, in Monson, MA.  We made it for a can release.  Monson is about 16 miles north of I-84, 17 miles west of I-91, or 5 miles south of I-90, near the far northeastern corner of Connecticut.  This is not quite as remote as Hill Farmstead, it’s still a bit of a rugged approach to the brewery.  We waited on line in the snowy driveway for their can release of Very Green, Lights On and Alter Ego.  Despite limits, we heard that there were only 2 cases of Very Green for purchase (not a per person limit, this was all that was available for all).  Although we got there early, the Very Green was gone almost instantly.  No food available, and the bar was closed to tastings since it was packed with people filling growlers.  These hard-to-get Tree House beers are well worth the wait…check the website for hours (very limited) and availability!

Tree House is very new on the beer scene but has already created a buzz around the quality of their beers. 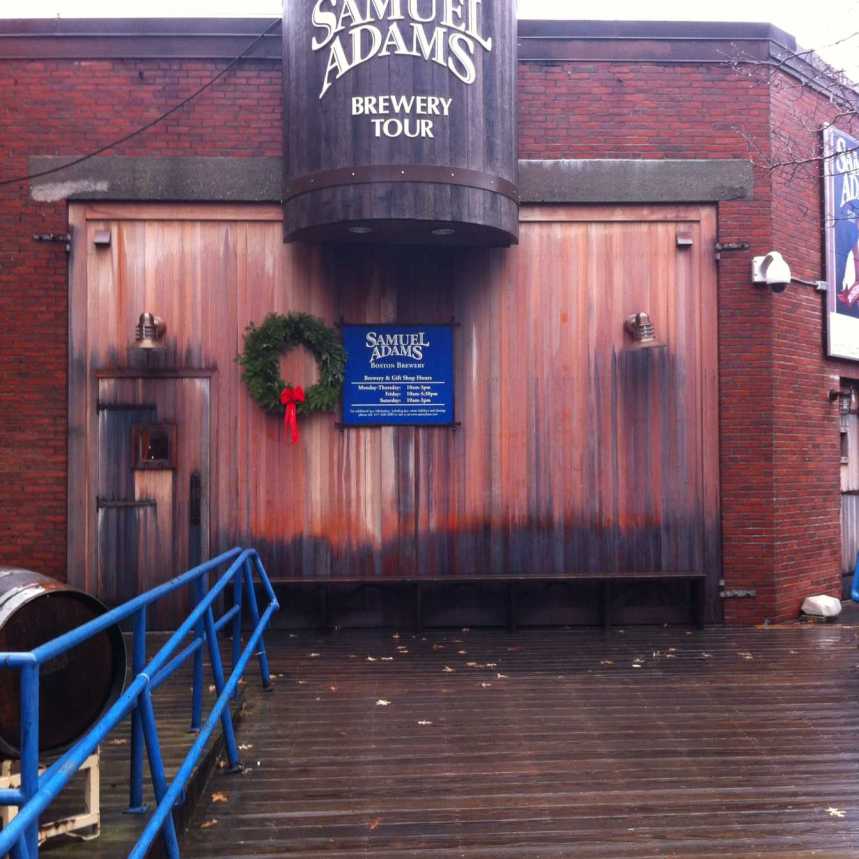 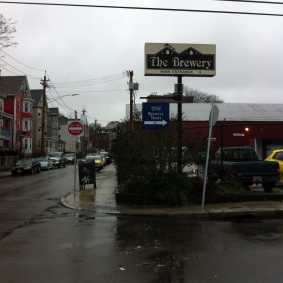 Great tour!  If you are in Boston, this is an easy drive or subway ride out.  It is an interesting experience, good beer, lots of free pours at the end of the tour, along with a complimentary Samuel Adams beer glass.  Samuel Adams is the pioneer in craft beer industry and continues to pioneer new processes.

On the harbor in Boston, Harpoon is worth a visit, although lines were long to enter the tasting room.  Upstairs, the tasting room has long tables, ships hull or beer-hall style, that creates sense of community (everyone sitting together at the table, etc.).  Limited bar foods and plenty of beer here.  They also have a location in Vermont that is worth a stop if you are doing the Vermont Brewery Challenge – Passport Program. 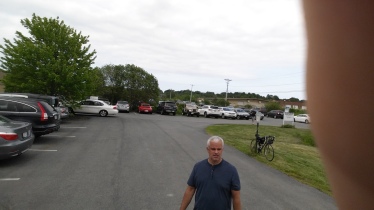 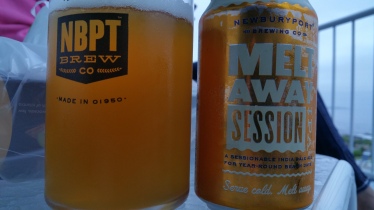 We lucked out and stopped by during one of their music festivals featuring Willy Porter.  Live music, heavy music vibe accented by the beers makes this a fun stop in the Cape Ann / New Hampshire bound area.  Melt Away, an American IPA was absolutely our favorite citrusy session ale at 4.6% ABV.  Green Head IPA, a west coast IPA at 7.2% ABV was also worth a try. 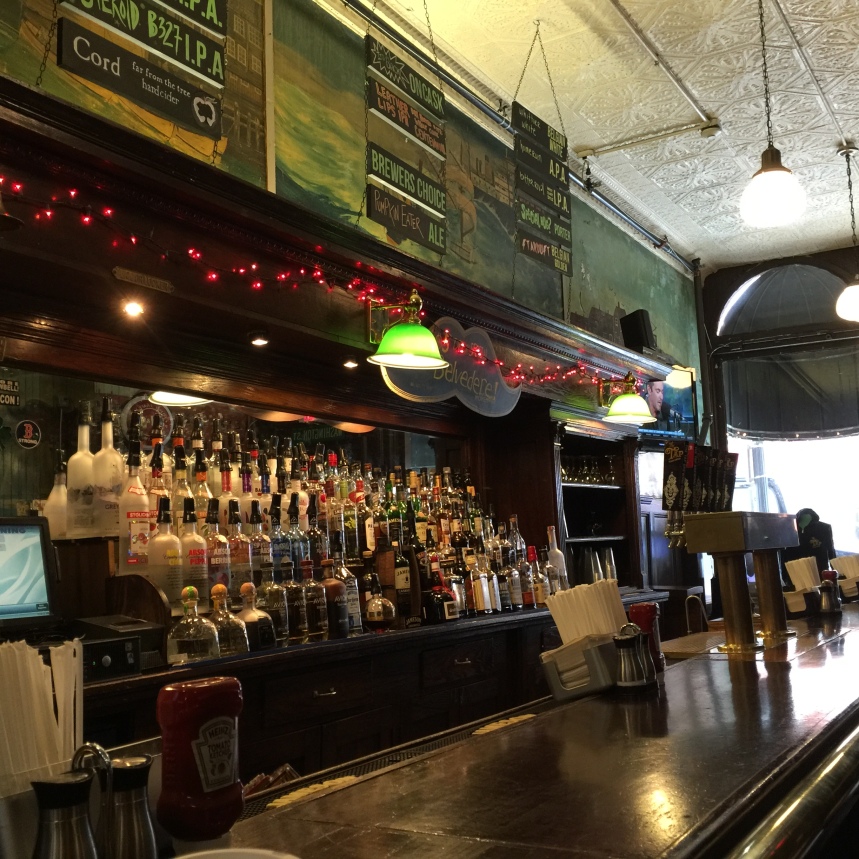 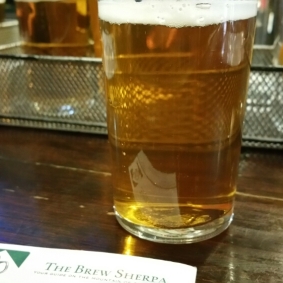 The Tap Brewing Company offers ales and lagers in historic downtown Haverhill, MA since 2003.  They serve a broad menu of American pub food.  We tried two flights for a total of 8 of their beers.  The brewhouse is located in the same building, with tanks and an extra pub/restaurant area located downstairs.  It seemed that the beers, in general, were above average.

Located in Hampton, New Hampshire is an established, large brewery with an onsite restaurant called the Hayseed. Good food, plenty of choices of good beer, and an awesome outdoor fire pit make this a worthwhile stop.  Smuttlabs has allowed Smuttynose to experiment and collaborate to expand their quality offerings.

We finally made it to Maine.  No question, Portland, Maine, with a metropolitan area population of approximately 500,000 (1/3 of Maine’s total residents), is a booming beer lover’s paradise.  There are Maine Beer Tours that are available, but we decided to use google and word-of-mouth to create our own experience.  We know we missed some, and also feel great about the prospect of returning to fill in the missing blanks.  We also tried to meet up with The Beer Babe,  but will have to try again next time…

The Maine Brewers’ Guild promotes and protect the state’s more than 60 breweries and brewpubs — which, combined with retailers and wholesalers, led the beer industry to have a nearly $1.3 billion economic impact in Maine last year, according to the Beer Institute.  How about that?  Beer is good for the economic health of the State 🙂

We hit a can release – beers.  The Substance, Swish, Bucolia in tow!!  A snow storm, tastings of most of their beers.  Great beers.  Located in an incubator building, across the street from Allagash; next to Foundation; round the corner from Austin Street.  This is a DO NOT MISS…we loved Swish and The Substance.  Clean, citrusy, hoppy Maine IPA’s are full flavored and crisp.  Bissell Brothers announced that in the second quarter of 2016 they will be moving the entire operation to the Brick North building at Thompson’s Point in Portland. The move will include a significant increase in production capacity, tap room size, & retail efficiency. 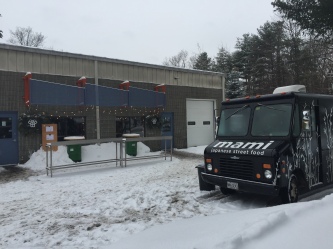 A small brewery adjacent to Bissell Brothers offers a strong selection of quality beers, which on its own are impressive.  The buzz about Foundation is strong, and Epiphany, their double IPA is rated 98 by Beer Advocate supporting the satisfied peeps filling the brewery/tasting room. 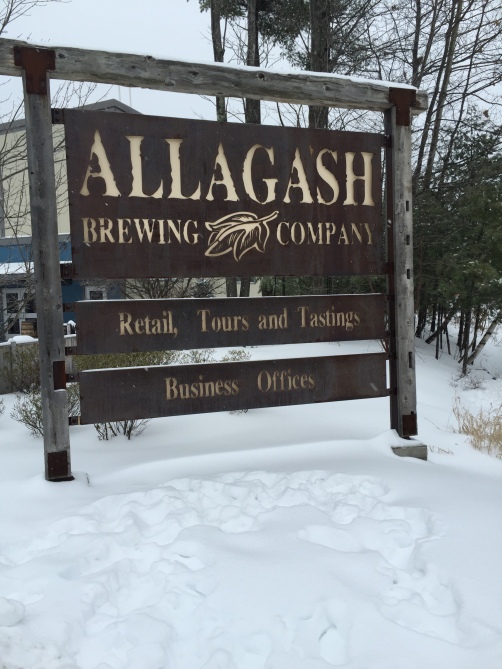 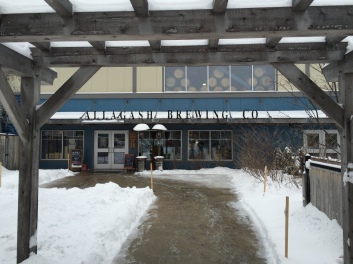 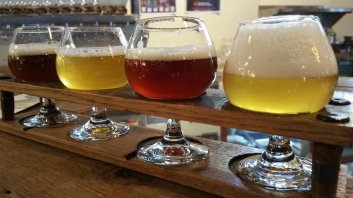 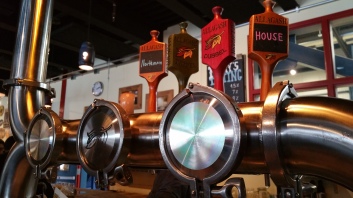 Free tasting – flights.  Big brewery.  Single owner.  Impressive coolship.  Creative with some flexibility to focus on great beers and experimentation without a full focus on the $$.  Allagash continues to fine tune their distribution to focus on effectiveness.  This is a pro-operation with GREAT beers!  Allagash is a master of Belgian styles and have been involved with craft brewing since 1994, and bottle conditions its beers. 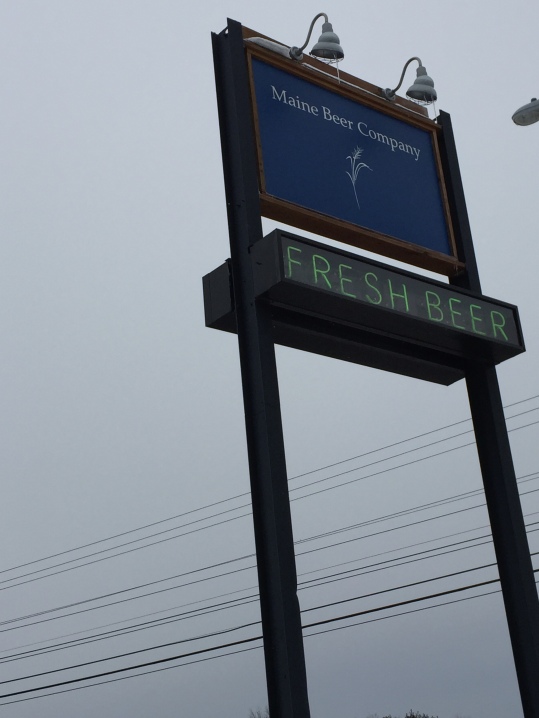 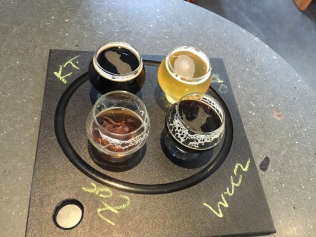 Located in Freeport, Maine (home of L.L. Bean and outlet shops), Maine Beer Co. produces excellent beers in a “green” setting with recycling and solar power evidenced.  Good pretzels and worth a taste while sampling their array of high quality beers.

With over 35 beers on tap—mostly Belgian—and a beautiful hand-crafted bar designed and build by a local artisan, this brewpub (rated at the 19th best in the US) is located in Brunswick, Maine, between Bath and Freeport.  Originally Lion’s Pride, in 2014 the beer bar, attached to Lively Brewing Company (owned by Chris Lively) is related to the world famous Lovell, Maine beer bar, Ebenezer’s Pub (which has been rated as the #1 beer bar in the US). 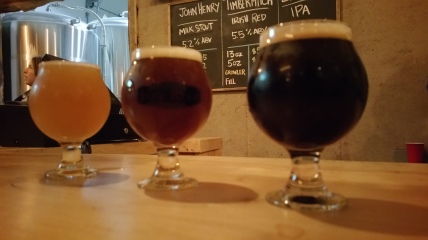 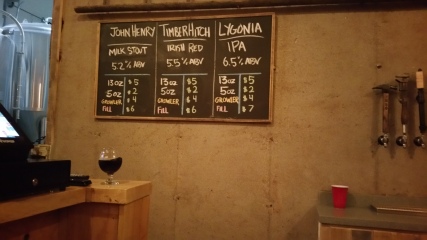 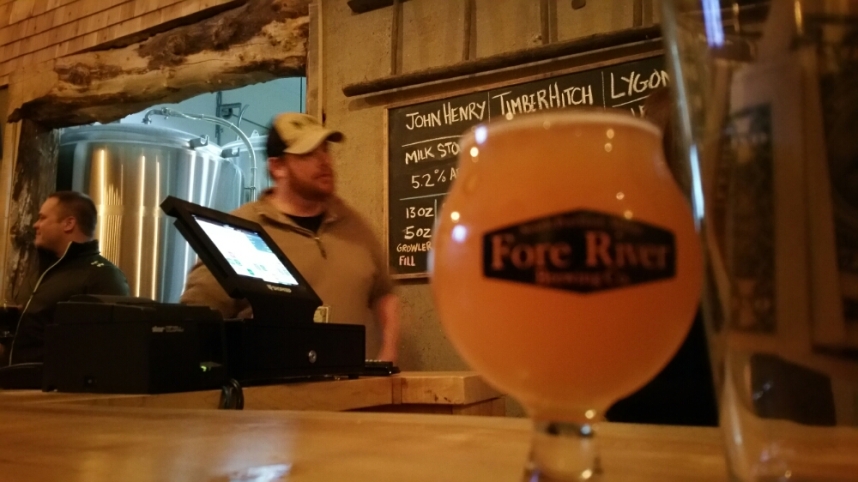 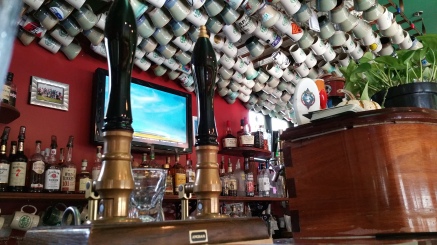 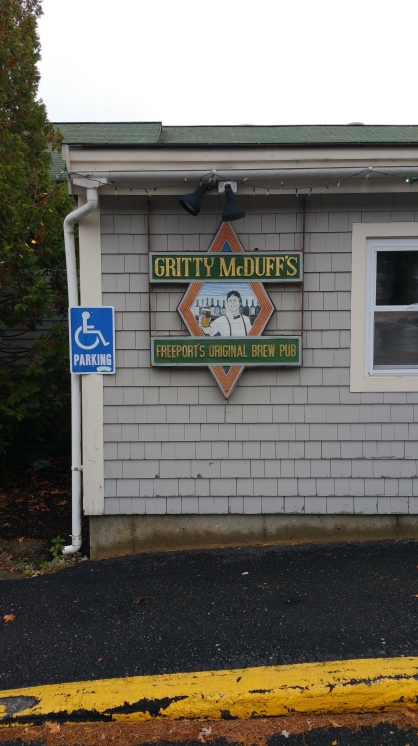 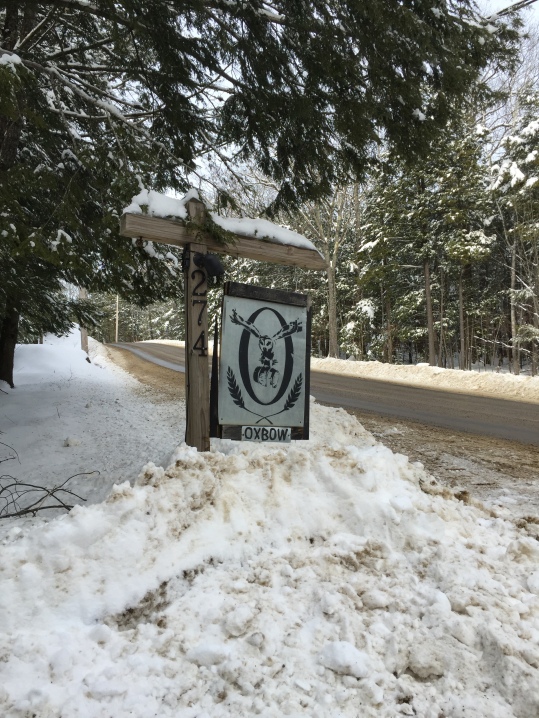 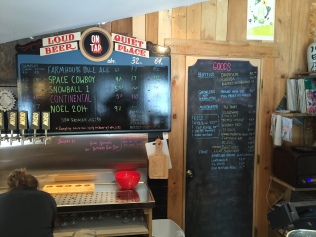 It is remote in Newcastle, Maine, about an hour northeast of Portland!  We thought we were turning into a residential driveway.  This brewery is rustic but charming.  Their Belgian beers are great!  They had a new beer named “Bowie” after the recently deceased Ziggy Stardust.  We passed a sign “Welcome to Cowshit Corner, Newcastle, Maine” as we neared Oxbow. 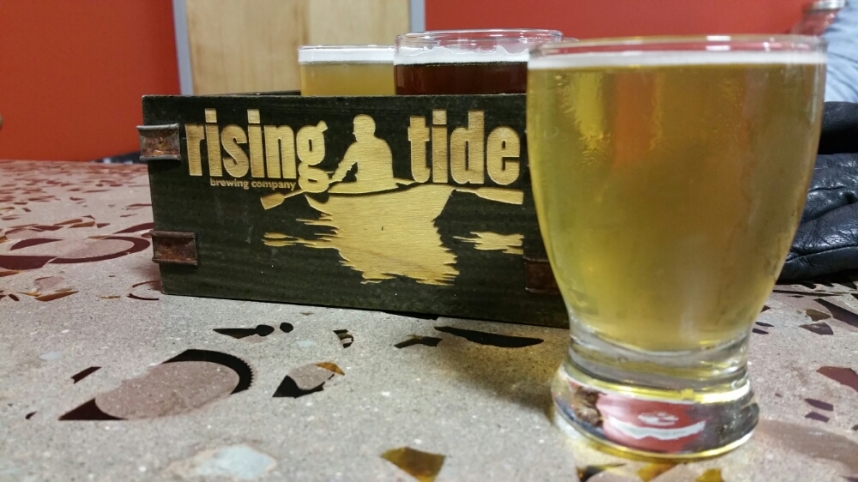 Rising Tide Brewing Company is a family-owned craft brewery located in Portland, Maine. Rising Tide specializes in artisanal, hand-crafted ales brewed in small batches, and is distributed in New England.  We really enjoyed their Gose, made with seawater for a salty yet light and crisp beer with lactobacillus and coriander.  Cutter was also a favorite DIPA, well hopped.  Quite a sniper at 8.7% ABV.

On our way home, we stopped in Brewster at Bull & Barrel.  With Sweet Home Alabama playing, a mechanical bull in the middle of a large rustic building, and events including line dancing…we thought we might have detoured out of the Northeast and stumbled into the South.  The restaurant and brewery is situated near the base of the East Branch Reservoir of the New York’s Croton Watershed supply system and they report that this water is used in their brewing process.  We ate ribs and fried pickles, tried all 9 of the beers on tap, and continued on to meet my Aunt for a long due visit.  Average beers, at best, available on tap or in growlers.