Ok, I admit I had a less than attractive mental image of what a “mad taco” might infer…

On a very recent beercation to Vermont, with the goal of visiting Hill Farmstead (http://www.hillfarmstead.com/), The Alchemist (http://www.alchemistbeer.com/), and finding some of Lawson’s Finest Liquids (http://www.lawsonsfinest.com/), thebrewsherpa and I ended up in Warren, Vermont.  Yes, anyone can visit two of these three breweries producing world-class beers, but there is no public location for Lawson’s.  Sean Lawson continues to brew quietly from a private location, and distributes his beers locally at a few select resellers or restaurants/bars.

We arrived at his largest “distributor”, the Warren Store (802) 496-3864 in Warren, Vermont, the night before his weekly delivery.  No Lawson’s available until the next morning, however, we were able to taste some across the street at the bar located downstairs in the beautiful Pitcher Inn.  Smoked Maple Lager collaboration with Jack’s Abby Brewery (http://jacksabbybrewing.com/) was tasty, a bit too smoky for me, and just right for thebrewsherpa, was enjoyable outside near the sound of the creek.  We also tried a glass of Spring Fever Session IPA.  Next stop, the Localfolk Smokehouse, in Waitsfield, VT (802) 496-5623, had the same Lawson’s on tap.

Hm.  I admit I was worried, with limited signage/visibility, construction obscuring the entrance, a disappointing can/bottle list (we already had purchased four cases of Heady Topper in Waterbury): 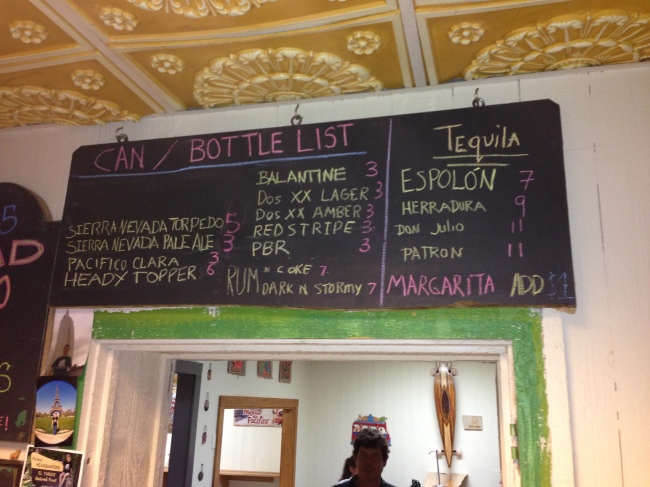 and the feeling of being in Mexico.

Meh, we were here, so we readied ourselves for a beer!  But wait, do not read a book by its cover.

This place is f**king amazing!  The tap list is over the top:

Now it was time to get serious.  The staff was knowledgeable and represented this business extremely well.  The owner is fortunate to have such dedicated employees, who worked well with us to understand the food menu, the taps, and showed us their cold smoker, the source of the excellent smoked pork.

Thank you to Kit Perreault and Miguel Villa for a fantastic evening, great beer, great food, and great company.  Highly recommended on any Vermont beercation…it will not disappoint!

Thebrewsherpa had the “wet burrito” and I had the tostada with pork.  Warning:  arrive hungry and thirsty for the best overall experience.  We will be back soon.  Prost! 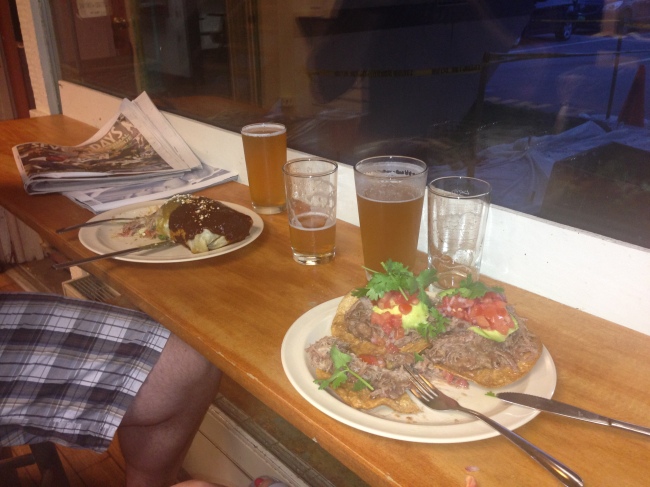 One thought on “I Ain’t Mad at Cha”