In 2010, the craft beer scene in New York City was in its infancy.  The undercurrents were there for massive change, and one of the catalysts of change was developing a mobile beer app in the late hours after-work.  Greg Avola lived in New York City, and worked full-time in IT at ABC News.  Greg’s knowledge of coding, coupled with co-founder Tim Mather’s design expertise, lead to the development concept for a social app, similar to Foursquare, that would ultimately create the platform to be called Untappd.

Things certainly have changed.  We met up with one of Untappd’s  co-founder’s and CTO Greg Avola recently at Untappd’s 7th birthday celebration at The Pony Bar, at 1444 First Avenue (75th Street) on the UES of NYC, and had the opportunity to catch up with him. 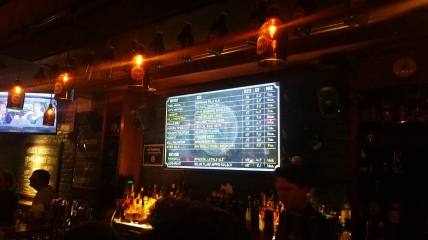 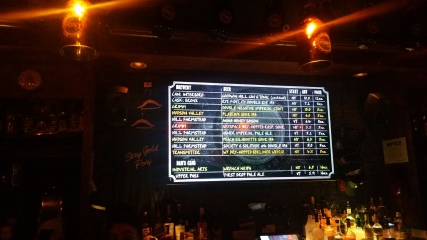 Greg will be the first one to tell you that Untappd’s success was a surprise to him.  At first, the project was a hobby, but the growth experienced by the company has been exponential.  In February 2016, Untappd merged with Next Glass, a wine and beer identification/recommendation app, and now operates out of Wilmington, North Carolina.  With approximately 100 employees, the financial stability has allowed both Greg and Tim to focus exclusively on the growth of the Untappd brand.  The recent launching of Untappd for Business has provided a revenue stream which in turn, provides even better information to Untappd’s social user-base.  The synergies are relevant and integral to the success of the financial and social aspects of the app.

Users pay nothing for the information they access.  A user can search for beers, local venues, ratings and friends at no charge.  On the other hand, users have already topped 500,000,000 check-ins, providing a valuable database to commercial subscribers.  Data and analytics allow bars, restaurants and breweries to evaluate their beer-related offerings and decisions, which, in turn, optimally supports the social user.

As a social user,  Untappd “taps into” the nature of beer culture, allowing a real-time sharing of who, what, where and when.  Take a look at some screenies that allow the user to locate venues nearby (breweries, restaurants) along with maps, check out what’s on tap, review recent ratings of the beers, and even call an Uber straight from the app. 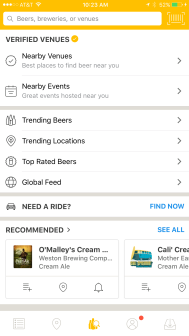 An online list of beer venues and their menus is accessible anywhere you are traveling.  Drill down to get more information and find exactly what you are looking for, then connect with friends to see what they are drinking, or check-in a beer.  Now the check-ins serve more than just a social purpose.  The check-ins also allow the user to keep track of beers they have enjoyed (or not).

Let’s say I want to find a beer called “All Green Everything” brewed by Other Half Brewing in NYC and confirm that it is as good as I have heard it is: 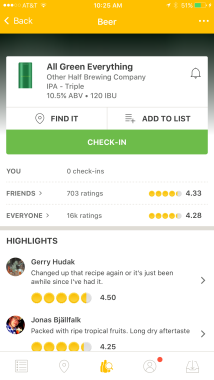 But where is the brewery, and is it on tap there…just drill down a little more: 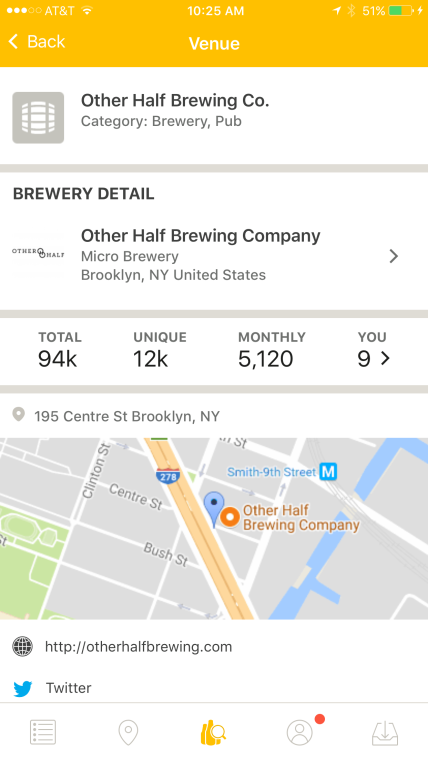 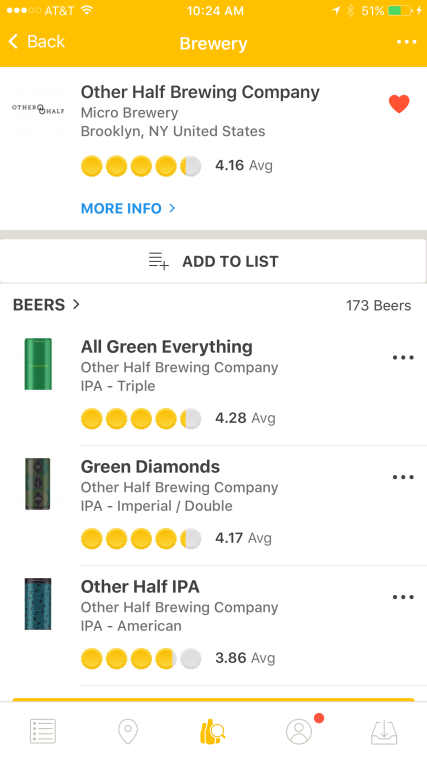 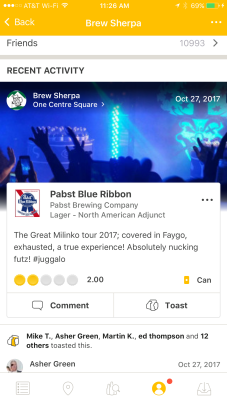 And I see my friend, Brew Sherpa, enjoyed a beer and an event (oh dear, for those of you who who know what is going on in the photo … it was INSANE):

For beer lovers, Untappd has only gotten better.  The information is available at no cost to the social user, and the commercial user can continue to deliver better selections, a perfect circle.