Ocean, New Jersey, we like it there.  Summer memories of the Jersey Shore, fishing, music, friends, and….suds.

Yesterday afternoon, the American Homebrewers Association (http://www.homebrewersassociation.org/), in collaboration with Kane Brewing Company (http://www.kanebrewing.com/), held a rally at Kane Brewing Company’s headquarters.  As a perk, Michael Kane gave away 5 gallons of wort to each AHA member, a tasting glass, and tickets for what I would consider to be a lot of free beer.  The event was heavily attended, with homebrewers dragging in everything from plastic fermentation buckets to half barrel SABCO fermenters.  We couldn’t wait to taste the beers and to learn about the wort which was about to be poured into our fermenters (yes, we were the nerds with the SABCO half-barrel fermenters).

The wort provided was called “AHA Rally IPA“, an American IPA Brewed with Experimental Hops, with the following recipe:

We have the opportunity to select the yeast(s), and have decided to use S05 (American Dry Yeast) on the first 5 gallon batch and a Kõlsch yeast on the second 5 gallon batch. 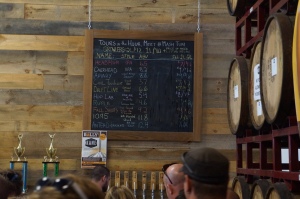 Overall, this was an excellent Rally, thank you to the American Homebrewers Association and to Kane Brewing Company.  The exposure to your facility, the tastings and the wort (and the resulting beer – already beginning to ferment) will keep Kane Brewing Company on our lips and in our minds as we remember a great day.  We missed Michael Kane, who was lucky enough to have the opportunity to receive an invitation to join Sierra Nevada at their 2nd Annual Single, Fresh, Wet & Wild Harvest Festival in Sierra Nevada’s Hop Field in California (http://www.sierranevada.com/sfww).  Congratulations for the progress you and your team have made since launching the brewery in August, 2011.